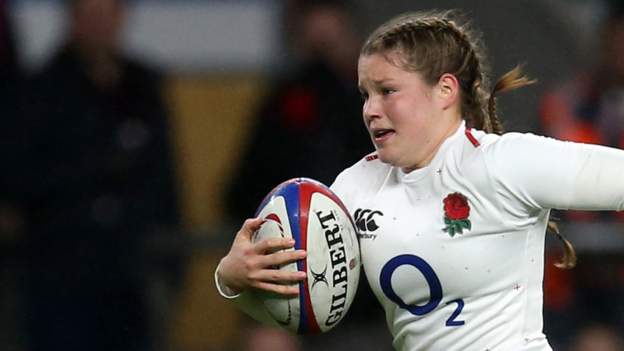 England wing Jess Breach says this Six Nations "shows people want to watch" women's rugby, with the Red Roses set to break an attendance record when they host Wales in Gloucester on Saturday.

Breach believes the increase in fans is a result of the tournament being played separately from the men's event.

Breach said moving to a new tournament window "has been a really good shift".

The Women's Six Nations is being played after the completion of the men's tournament for the second year in a row.

"It just shows that we can fill out stadiums," Breach continued. "Now fans can just watch us [rather than the game being played before or after men's Tests].

"It shows that if we are standalone, people want to come and watch us."

Before the tournament began, Breach called on men's players to offer more support in promoting the women's game.

The Harlequins wing says those comments "got a lot of conversations started", but added: "We've still got a long way to go.

"The boys [England's men, who came third after winning two of their five Six Nations fixtures] had an all right tournament but to get behind us would be a nice thing."

'I couldn't catch a break with injuries'

Breach is finally ready to make her England return after a year in which she suffered a bad ankle injury, followed by an even more serious back issue and most recently a shoulder problem.

She was "raring to go" before England's 12-try win over Italy last weekend, before a positive Covid-19 test ruled her out.

After such a nightmare run, Breach will want to stake her claim on a place in a very competitive back three as table-toppers England target a fourth successive Six Nations title before the World Cup begins in October.

"After my shoulder not many people knew what to say because they'd already said it after my ankle and back," she said.

"Then obviously catching Covid as well I couldn't really catch a break, but hopefully my bad luck has gone.

"I want to get as many minutes as I can under my belt. For me, it's just about playing."