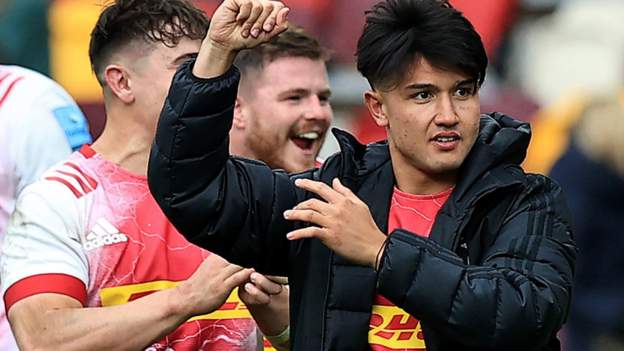 Marcus Smith has had the sort of hectic 12 months that might convince many professional athletes to take time out from their sport and embrace the chance to rest.

But after a week's break in Dubai following his debut Six Nations and regular visits back to family in Brighton, the Harlequins and England fly-half said he is "re-energised" for a tilt at domestic and European club honours.

Smith pulled on a Harlequins shirt on Sunday as they beat neighbours London Irish 41-14 to cement their Premiership play-off credentials.

Having faced hostile atmospheres in England colours away in recent weeks, he steps back into Quins colours for their trip to French side Montpellier in the first leg of their Heineken Champions Cup last-16 tie.

"It was an unbelievable experience with a lot of top boys," Smith said of the Six Nations.

"I learnt a lot in high-pressure, tough environments like Murrayfield and the Stade de France - both tough places to go.

"I learnt a lot of lessons about myself personally, and my mentality, going to those sort of places.

"You get a lot of stick as an English player going to Murrayfield and I realised that maybe I was a bit naive going there thinking it would be plain sailing. It was a tough Test match."

"We were close in a lot of games," said Smith. "We were there or thereabouts at 70 minutes and I guess we're always looking for that perfect game - and we probably didn't get that if we're being honest.

"But we learnt a lot as a group. On the review day post-France we had a lot of ideas, and I'm sure whoever gets selected for that tour to Australia in the summer will be better equipped to go and do the job."

But before any thoughts of time away with England become reality, Smith knows he can achieve big things with Harlequins.

The Premiership champions look set for another place in the play-offs with four games left, but Top 14 leaders Montpellier are first up, with familiar faces from the Six Nations Grand Slam winners and Premiership encounters.

"Montpellier are flying high," Smith said. "I played against a couple of them for France in Paris and they've got a big forward pack and also [former Bath and England back row] Zach Mercer running the show.

"I'll try to identify a couple of things before the game and I'm sure the boys will be full of energy and motivation for a big game of knockout rugby.

"One positive with this group is we're not fazed by anyone or any situation. We back ourselves and we'll work hard to get a cohesive performance and try to score as many points - then we'll worry about the second leg.

"If we can go there and score four tries it will give us a brilliant chance coming back to The Stoop."

Smith also believes there is a "different vibe" around Harlequins this season compared to the same stage last year when they timed their run to the Premiership title to perfection, playing some eye-catching rugby.

"Last year nobody gave us a chance and I don't feel anyone really gives us a chance this year," he added. "But as a group we're pretty tight, we're together, we know our goals internally.

"Every French team treats Europe with a great deal of respect. We're expecting the best version of Montpellier and we're excited for that challenge.

"We're going to try to take them out of their comfort zone and throw something at them that they might not expect."

Despite a hectic year playing for Harlequins, England and a late call-up to the British & Irish Lions tour of South Africa, Smith knows how important time away from the game, no matter how brief, has been to keeping him focused.

"I've got a brilliant support unit off the field - my mum, dad and brothers," he said.

"They give me an outlet whenever I go down to Brighton and spend many hours playing board games and it allows me to escape and get away.

"My girlfriend has been brilliant as well over the last couple of years. I'm re-energised, I love playing for this brilliant club and I know we've got a lot of work to do for the rest of this season and a lot of winning.

"I'll give it my all individually to be a better player for the team and I know all the boys will as well."