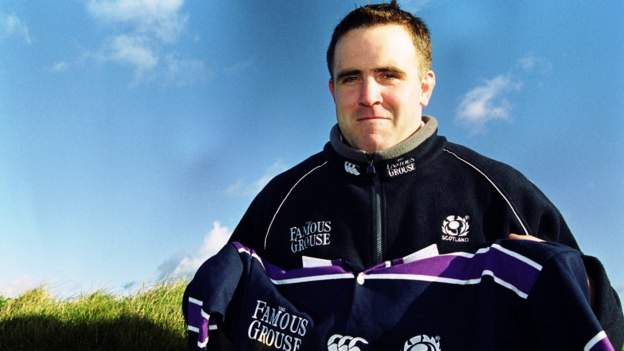 Tom Smith was 5ft 10in tall, but when talking to those who knew him and who played with him you would hear of a man who was somewhere closer to 10ft 5in tall.

A quiet colossus, a revolutionary in new-age propping in the late 1990s, quite possibly the greatest Scottish rugby player of the professional era and, in the words of a fellow front-row immortal Jason Leonard, one of the finest Lions in history.

The news of his passing on Wednesday at the sickeningly young age of 50 shocked the world of rugby. It's not that people expected him to overcome the horrible cruelty of his 2019 colon cancer diagnosis, but that was the dearest wish and it was given hope when he appeared at Murrayfield last autumn.

When bringing out the match ball on the day Scotland played South Africa, Smith gave the impression of a man who could pull off the greatest miracle. Flanked by his kids, it was easier to suspend reality and conclude that he had years left in him, not months.

What dignity and strength he had that day - and every day. What class.

'My kind of player, no fear and no bother'

Everybody knew that Smith was a great player, but some knew it earlier than others.

Gregor Townsend remembers playing with him at schoolboy level and marvelling at his skills. A prop who could also play number eight, a guy who could pass off both hands, who could run and read a game like few others. Townsend, and so many others, will have been devastated by Wednesday's news.

When researching a book on the 1997 Lions, some of the game's greats were asked about Smith. The responses were incredible. It was only when you spoke to his fellow players that you got the full realisation of how wonderful he was.

Former Scotland and Lions head coach Jim Telfer: "Tom was exceptional. He was my kind of player, no fear and no bother."

Ex-Ireland and Lions hooker Keith Wood: "I thought he was magnificent."

Former England and Lions flanker Lawrence Dallaglio: "He didn't say much, but he didn't have to. He inspired everyone around him."

He played 61 times for Scotland which was a feat in itself given that he was only 18 when he suffered the first of the epileptic fits that lived with him throughout his playing career.

"During one nocturnal seizure I fell out of bed and broke my toe," he once recalled. "Then around 2005, I started having daytime seizures which caused short-term memory loss and nasty headaches. I played a Calcutta Cup against England after having a seizure on the day of the game.

"It wasn't really something I shared with other people, though. I always wanted to be judged by what I did on the field, not by what I did in spite of my epilepsy. There are plenty of people out there with epilepsy. They just get on with it."

Just get on with it - it was his way of things. He played six consecutive Lions Tests in 1997 and 2001 and he just cracked on.

That first tour, in South Africa, is the stuff of legend. That was the beginning of his international story, a prop who had only played three games for his country before being selected by Telfer and Sir Ian McGeechan.

Tour captain Johnson admitted he didn't know Smith "from a hole in the head" when the squad was first named. That would change soon enough.

Telfer spotted Smith's qualities even before he had made his debut for Scotland. He rang McGeechan before the prop's first cap, against England in 1997, and told him to keep a close eye on him.

"Jim said: 'Don't just look at how he gets on in the scrum, look at how he gets about the field, how he reads the game. He's different - and I think he might be the kind of guy we could use in South Africa'. So I watched him and I could see that he was a special player."

Johnson remembers doing line-out drills early in the famous tour of 1997. It was the effortless way Smith understood his brief and the relentless accuracy of his execution made the captain's eyes open.

Some of the other props toiled. Smith nailed it every time. Good ball, terrible ball - it didn't matter. Smith dealt with whatever was thrown at him.

"Then you add in his performances - and Gauteng [before the first Test] was the big one," said Johnson. "He had to scrummage against a big, horrible, nasty team in a full-on Test match environment at Ellis Park and to do that as well as doing all the other things he could do was incredible."

Graham Rowntree, the English prop, watched on from the sidelines that day.

"I was astounded by Tom's performance," he said. "There were a few props around that time who changed propping. It wasn't just about set-piece dominance anymore - because of them it suddenly became about what you could do with a ball in hand, what you could do when you make a break.

"Nowadays you take that for granted with all prop forwards, but back then it was only Tom doing that and a couple of French forwards - Christian Califano and Franck Tournaire - and they changed propping."

The 1997 series was one of the most storied in Lions history. The feeling was Smith, Keith Wood and Paul Wallace, the Lions front row, were too small to cope with the monsters they were going up against - Os du Randt, Naka Drotske and Adrian Garvey.

The Springbok supporters, their entire press pack and much of the visiting media suspected it was going to end mercilessly for the tourists.

It didn't, of course. The brilliance, cleverness, mobility and heart of the Lions front row won the day and then the series. Smith was a remarkable performer. World class from head to toe.

"Tom was small, but he was strong," said Wood last year. "He was fast and had the most unbelievable hands - I mean, truly extraordinary.

"It was funny, we toured again in 2001 and as soon as we bound up for our first scrum together in four years it was like settling down into a familiar armchair. It just felt comfortable and he would do anything to make your job easier.

"You would tell him you needed something and he would barely acknowledge it, he would just accept it, no matter what you said. He was properly selfless. His job was to do his job and part of his job was to make my life a little bit easier and so that's what he did."

Smith spoke about travelling to the first Test in Cape Town in 1997.

"I remember sitting on the bus and and they had flags hanging on all the lampposts on the way to the stadium with a springbok stamping on a lion. And I was like: 'What the hell am I doing here? Why am I doing this to myself?' The pressure was just so intense.

"It's funny how you look back and remember things - half the emotion going to the game was fear. Often I was quite stressed, quite nervous and there was an element of fear - fear of failure, which I think drives many players. It certainly drove me."

It drove him on for another eight years as an international player. He kept the fear under wraps, but the bravery? Everybody could see that.

In the face of terminal illness, he was never more extraordinary. The tributes are flooding in. He wouldn't have had much truck for such praise, but he's deserving of each and every eulogy. A great player and a tremendous man.