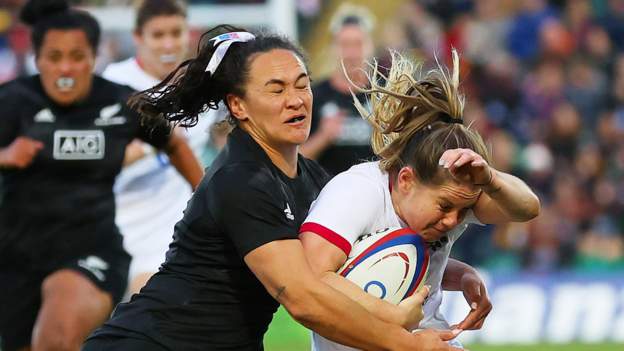 The Black Ferns have brought in Smith - who was assistant coach as New Zealand's men's side won two World Cups - before the October tournament.

There are also rumours that scrum expert Mike Cron has joined the set-up.

"They're taking it seriously aren't they?" Middleton joked.

"Being second at their own World Cup will not be acceptable."

Middleton remembers watching former All Black Smith play when starting out himself, before seeing him in action as a coach at Northampton between 2001 and 2004.

"I was absolutely in awe of him," Middleton recalls.

"To think you're now pitting your wits against him is quite surreal to be honest."

'I'm going to have a word with Eddie'

The Black Ferns are aiming to secure their sixth World Cup triumph when they host the tournament between 8 October and 12 November.

Rather than be concerned about their increase in coaching expertise, Middleton said the move "is absolutely brilliant".

"I'm going to have a word with [England men's head coach] Eddie [Jones] and see if he'll come in," he joked.

"You want the World Cup to be the absolute pinnacle of women's rugby," Middleton added.

"I think it is a massive mark of respect for the other teams in it that New Zealand have brought in probably two of their highest profile and most experienced coaches to support their World Cup effort."