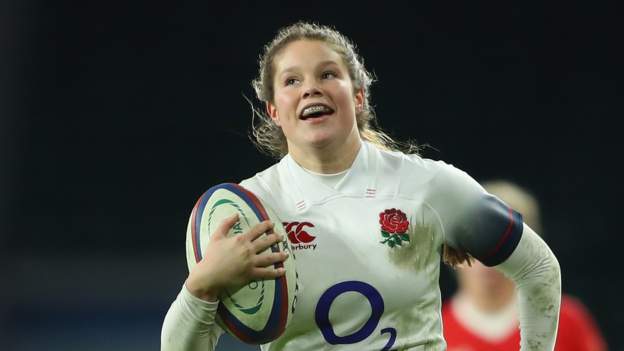 Wing Jess Breach will make her first England appearance since May 2021 when the Red Roses host Wales on Saturday.

Breach won the 2021 Women's Six Nations with England but ankle, back and shoulder injuries and Covid-19 have kept her out of Test rugby since then.

The 24-year-old's inclusion is one of eight changes made after the Red Roses claimed their second win of the tournament against Italy.

Abby Dow, normally a wing, starts at full-back with head coach Simon Middleton explaining the move allows him to have all his best players on the field at once.

Zoe Harrison and Helena Rowland remain as the 10 and 12 combination for England's first home game of the tournament, which is set to be played in front of a record crowd of over 12,000.

Outside centre Emily Scarratt returns to the starting 15, while wing Lydia Thompson - who scored a hat-trick against Italy - is ruled out by a minor injury picked up in training.

Up front, prop Sarah Bern returns along with flanker Marlie Packer, while Sarah Hunter regains the captaincy from Cleall at number eight.

Twelve Wales players were given full-time contracts for the first time ahead of this year's tournament and the professionalism is already showing in their results.

They came from behind against Ireland and Scotland to claim two bonus-point wins and England captain Sarah Hunter says her side must be wary.

"Since they have got the contracts, I don't think it necessarily changes you physically but mentally it gives you that boost of being full-time athletes," she said.

"It's exciting, it's new, it's something that they've wanted for years and years. Their coaching staff and what they've done - they've galvanised their squad and you've seen that in their two performances so far.

"They've come from behind which is a really tough thing to do. It shows you the belief they have in each other. We don't want to let them into the game."

Some 'short of mark' for selection

Middleton said before the tournament that he would rotate his 40-woman squad as he considers his strongest starting XV.

But centre Lagi Tuima, uncapped scrum-half Ella Wyrwas and forwards Rowena Burnfield, Detysha Harper and Harriet Millar-Mills have not yet been given an opportunity.

World player of the year Zoe Aldcroft continues to be unavailable through injury, as do prop Hannah Botterman and hooker Amy Cokayne.

Middleton some players had not been given a chance because they came into camp "not in the shape they needed to be".

"We said all along we would rotate the squad," he explained.

"However, that also came with the requirement of training well enough to merit selection.

"Some players have pulled up a little short of that mark and, given the intense competitive nature of the squad, you just can't afford to not be at your best."