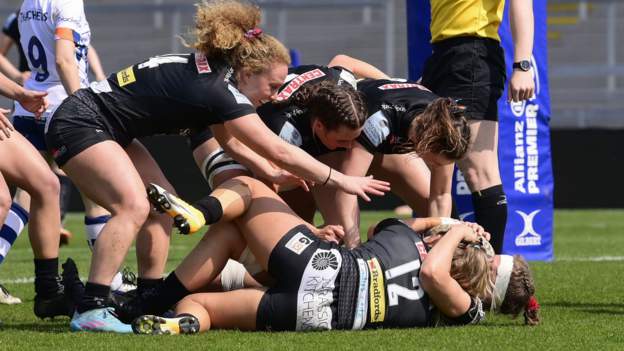 Exeter Chiefs head coach Susie Appleby says her side's Allianz Cup win over Harlequins is a "stepping stone" for her side in the Premier 15s.

The Chiefs scored nine tries as they won 57-12 for their first-ever trophy in just their second season.

Exeter are third in the Premier 15s table with two games to go as they aim for a play-off place.

"We can't go 'oh we won the cup' - this is the start of the next chapter," Appleby told BBC Radio Devon.

Appleby's side's victory in many ways mirrors that of Exeter's men's team, who won the LV= Cup in 2014, four years after being promoted to the Premiership.

Within two years they were in their first Premiership final and won the title a year later, before winning a league and European Champions Cup double in 2020.

"Winning's a habit, winning trophies is a habit and it doesn't come along very often," added Appleby.

"This has to be enjoyed for what it is, it's a trophy, it'll sit in our cabinet for another year and then it might come back or it might go elsewhere.

"Trophies are special, special things and they're special days, but we're hopefully paving the way for people coming in behind.

"We're creating something special which people want to be a part of and that's the most exciting thing."