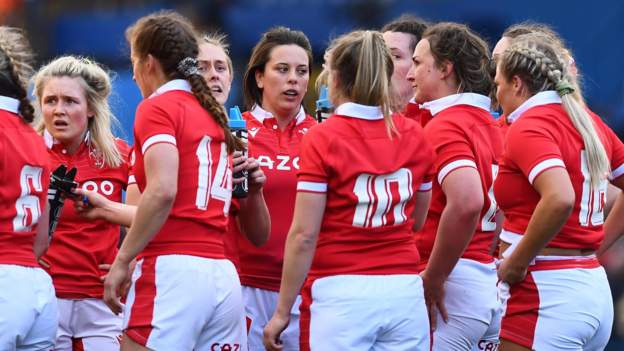 Wales have made eight starting changes to face Italy as they seek their best Women's Six Nations finish in 13 years.

Niamh Terry starts at full-back, Kerin Lake is back at centre, while Robyn Wilkins and Ffion Lewis are preferred as the half-backs.

There could be first outings of the campaign for experienced prop Caryl Thomas and utility back Lleucu George.

Elinor Snowsill drops out of the matchday 23, while Gwenllian Pyrs misses out through injury.

Kayleigh Powell and Carys Phillips, who started the previous four games, are named among the replacements.

Wales are targeting a third victory of the campaign on what has been dubbed Super Saturday, having beaten Ireland and Scotland in the first two rounds.

The last time they won three matches or more was in 2009 when they finished second and won the Triple Crown.

The Azzurre will also be looking to end their campaign on a high having ground out a win over Scotland in Parma last weekend.

They have made three starting changes, including a return for scrum-half Sara Barattin, Italy's most capped player.

Elisa Giordano returns at number eight, while Silvia Turan comes in at prop with Melissa Bettoni moving back to hooker.

The two sides did not meet in last year's Six Nations due to the shortened format, but Italy edged the 2020 contest 19-15 in Cardiff.

A lot has changed since then, with 12 of Wales' squad turning fully-professional at the start of this year, while 12 others have signed retainer contracts.

Italy too have taken steps to make their players professional in a World Cup year, announcing 25 central contracts for their players earlier this month.

"We know it's going to be a really tough day at the office. Italy are a quality team and we need to be 100% ready mentally as well as physically," said Cunningham.

"We want to finish with three wins, that is what this group deserves having worked so hard all season."

Commenting on selection, Cunningham added: "It's been important to build cohesion while trying various combinations and starting line-ups.

"There are players who deserve the opportunity to either start this final match or feature in the 23 having performed well in training throughout.

"It's great to see Kelsey Jones starting after a long-term injury, along with Caryl Thomas on the bench. Niamh Terry deserves to show what she can do at full-back and it's good to see Cara Hope getting a first start of the season too.

"Sioned Harries has made a big impact each time she has been involved and forms part of a very strong backrow. Ffion Lewis made an impact again coming off the bench against France and it's exciting to see her and Robyn together again."