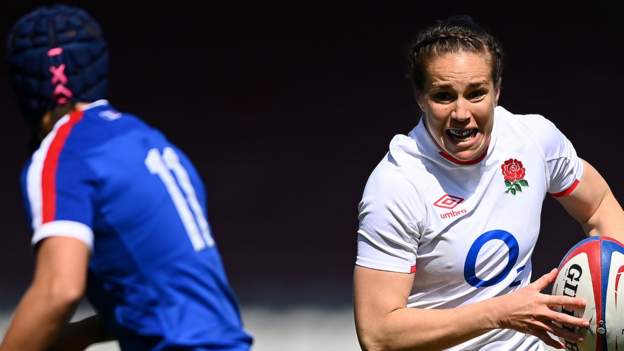 This Saturday's match between France and England is the finale of a six-week Women's Six Nations campaign and the latest round in a rivalry that may define October's World Cup.

The two nations have been a distance ahead of their Six Nations rivals, racking up four successive wins each, all by a healthy margin.

Someone's streak will stop in Bayonne though, with the game's winners taking the title.

These are the duels that are likely to swing the contest one way or the other.

Two scrum-halves from right out the classic number nine mould will come face to face on Saturday.

France's Laura Sansus began the Six Nations on the bench, but ends it as one of the stars of the tournament. The 27-year-old came on to spark France into life in their opening match against Italy and has been irresistible ever since. She is the tournament's leading try scorer, racking up six so far with an eye for a gap and pace to burn. Her deft hands have also set up four more for her team-mates.

Leanne Infante seems similarly established as her team's undisputed first-choice scrum-half, ahead of Lucy Packer and Natasha Hunt. The Bristol Bear brings relentless tempo to the Red Roses, and has shown some shrewd use of the boot as well during the autumn. With 50 caps to her name, she has plenty of experience and will need every bit to keep tabs on the wily Sansus.

Two all-court second-row operators will be action as the northern hemisphere's dominant packs find they don't have everything their own way for once.

Zoe Aldcroft, who can also play in the back row, was named the world player of 2021 after a series of rampaging performances powered England to a back-to-back record victories over world champions New Zealand in the autumn.

The 25-year-old has been less prominent in the Six Nations, with injury delaying her first appearance in the tournament until last weekend's 69-0 win over Ireland.

Madoussou Fall, 24, has been hailed as a player who could match or even surpass the efforts of the legendary Safi N'Diaye. Standing 6ft 2in tall, she is a rangy runner who can create havoc in the loose with her power and pace. She is also France's top tackler of the tournament - with 46.

Jess Breach has been hampered by a string of injuries over the past 12 months and missed the 74-0 Six Nations win against Italy after testing positive for Covid.

But the Harlequins flier, aged 24, showed she is still sharp and swift, marking her first international appearance since May 2021 with two tries in the 58-5 win against Wales on 9 April. She was forced off against Ireland by a cut to the head that required stitches, but will be hoping to slice open the France defence on Saturday.

Caroline Boujard was the top try-scorer in last year's Six Nations, running in five scores en route to her team's second-placed finish. The 28-year-old has only played three times since that 10-6 defeat by England in last year's title play-off, however. An electrifying runner at her best, can she prove she has lost none of her spark?