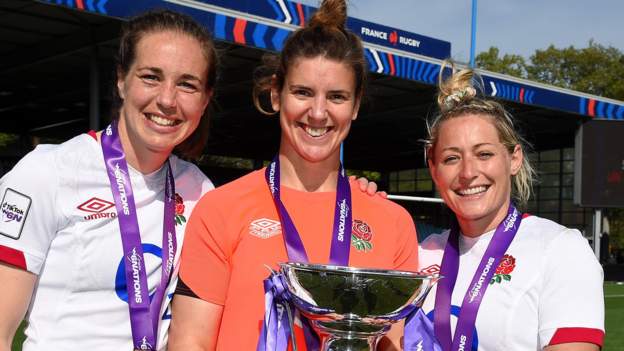 England have been confirmed as hosts of the 2025 women's World Cup.

The World Rugby Council also unanimously approved Australia as hosts for the men's World Cup in 2027 and the women's in 2029.

The United States will host the men's tournament for the first time in 2031 and the women's in 2033.

The Rugby Football Union said it wants 2025 to be the "best attended" women's World Cup and aims to fill Twickenham's 82,000 seats for the final.

The most recent World Cup hosted in England was the 2015 men's competition.

It is the first time World Rugby has announced the next five World Cup hosts at the same time, a move chairman Sir Bill Beaumont said provided "unprecedented certainly".

England have won the women's World Cup twice and lost in the final five times.

The women's World Cup will expand from 12 to 16 teams for the first time in 2025 and the RFU has already established a plan to fill Twickenham for the final.

England exceeded attendance targets set as part of that plan for the 2022 Women's Six Nations when they welcomed back-to-back record crowds.

A mark of 14,689 was set in Gloucester before it was surpassed in the following game when 15,836 watched England beat Ireland in Leicester.

The RFU will stage matches in venues across the country and aims to use the tournament to improve facilities, recruit more female coaches and referees, and boost participation and fan numbers.

Culture Secretary Nadine Dorries said £30m would be invested by 2025 as the government uses the tournament "as a catalyst to inspire more women and girls to get active".

A USA Rugby statement said being chosen as World Cup hosts in 2031 and 2033 "marks a pivotal turning point for the sport".

President Joe Biden had written to World Rugby offering his backing for the US bid, while NFL and Major League Soccer stadiums are competing to host matches.

World Rugby chief executive Alan Gilpin said he hoped the men's tournament could expand from 20 to 24 teams by 2031, suggesting that could even be possible for the 2027 edition.

It is hoped that staging two World Cups in Australia in the space of two years will boost declining participation numbers in the country.

With Australia hosting the British and Irish Lions in 2025 and the sevens tournaments at the 2032 Olympics, he said it will become "the centre of the rugby world over the next decade".