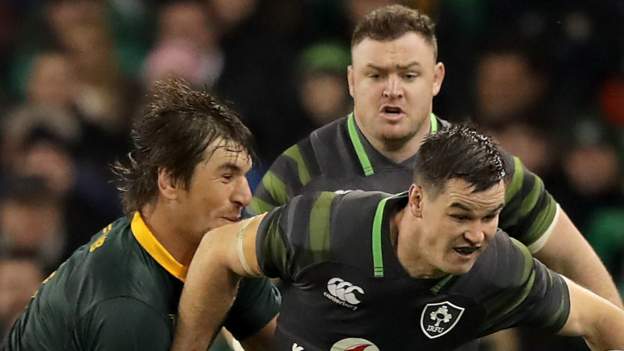 Ireland will host world champions South Africa in the first of three Autumn Nations Series contests to be played in Dublin this November.

They will also face Fiji and Australia as next year's World Cup in France comes into focus.

The meeting with the Springboks will come 10 months before the sides face off in a highly anticipated World Cup group stage encounter.

November's contest will be the first between the sides since 2017.

Ireland stormed to a one-sided 38-3 win then but the Springboks have since transformed and now sit atop the world rankings having lifted the Webb Ellis Cup in 2019 before beating the British and Irish Lions in a three-Test series last summer.

The sides are scheduled to meet in Saint-Denis on 23 September 2023 in the World Cup having been drawn together in Pool B alongside Scotland.

It has been four years since Ireland last played Australia - winning 20-16 in Sydney to claim their first series win down under for 39 years.

Before the autumn fixtures, Andy Farrell's side are faced with the daunting challenge of a three-game series in New Zealand this summer.

They have won 12 of their last 13 matches including a clean sweep of wins in their November matches last year.